Nearly 70% of households in Bangladesh are not connected to the electricity grid and so depend on kerosene for lighting. This includes most rural areas, and also the fringes of Dhaka. There are plans to extend the grid, but there is little prospect of substantial change in the near future. 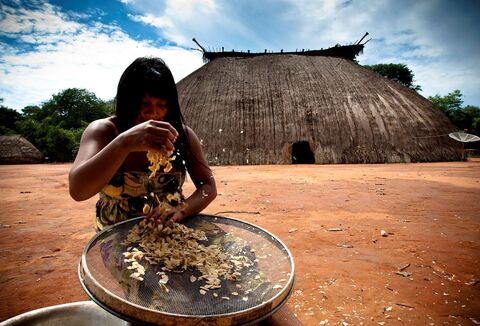 Rahimafrooz Batteries Ltd focuses on batteries for industrial solar use and other components for solar PV systems; and is part of the Rahimafrooz group of companies which has diverse interests including energy, supermarkets and telecommunications. The company was initially established in 1954 and began manufacturing batteries in Bangladesh in early 1980 by acquiring a manufacturing plant from Lucas, UK. Since then it has expanded and diversified, and now exports to India, Nepal, Bhutan, Sri Lanka, Afghanistan, Thailand, Singapore and various countries in the Middle East and former Russian Republics.

The Renewable Energy Development Project, which is funded by the World Bank and GEF and managed by the Infrastructure Development Company Limited (IDCOL), initially aimed to provide 50,000 solar-home-systems by the end of 2007, but this has already been increased to 200,000 systems because of the success of the programme, and may be further increased. IDCOL provides Participating Organisations in the programme with subsidies and concessional loans to purchase PV systems in bulk, and the partners can then provide credit to rural households to buy systems. PV electricity can have a huge impact on people's lives, providing power for lighting, phone charging, education and entertainment.

Solar home systems (SHS) are small, stand-alone electrical systems. They consist of a photovoltaic (PV) module which generates electricity from sunlight; a rechargeable battery which stores electricity so that it can be used during both day and night; a charge controller which prevents the battery from being over-charged or deep-discharged; and fluorescent lamps, wiring and fixtures.

Rahimafrooz has designed SHS for use in Bangladesh that can supply from three to six fluorescent tube lamps (FTL), using PV modules rated from 40 to 75 Wp. The systems are sized to provide light for four hours a day with twelve hours reserve battery capacity (autonomy), so that the supply is maintained during several days of limited sunshine. If two lights are switched off, then a television can be used for four hours per day instead. 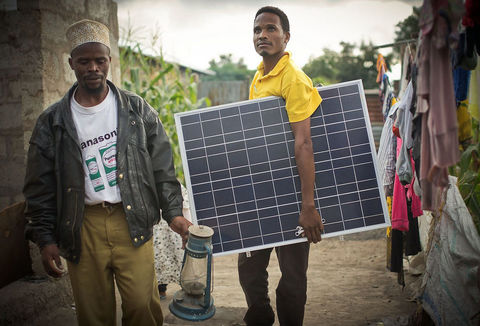 Rahimafrooz imports PV modules from Tata BP Solar (a joint venture between the Tata Group and BP Solar) in India, but are involved with the design and manufacture of all other system components. Rahimafrooz manufactures the lead-acid batteries for their own installations, and supplies them to several commercial customers. The batteries are rated at storage capacities from 55 Ah to 130 Ah. They differ in detailed construction from standard lead-acid car batteries, because a PV battery must withstand daily deep discharge cycles which would rapidly reduce the lifetime and storage capacity of a car battery. For this reason, Rahimafrooz batteries have tubular plates, which enable significant removal and replacement of lead during the discharge and recharge process, and allow regular discharge up to 80% of their capacity. They also have a large reservoir of electrolyte, to reduce the frequency of topping up. Other benefits are much higher charging efficiency (again, a feature which is not very important in car batteries) and a low rate of self-discharge.

Most of the systems sold by Rahimafrooz have been purchased by 14 other POs which are partners in the REREDP. Participating organisations receive both subsidy and concessional loans from IDCOL, which enables them to purchase the systems from Rahimafrooz. Initially the subsidy was about £55 per system but this has been gradually reduced to £28 per system and is due to end in 2008. This subsidy has enabled the organisations to offer credit to rural families, so that they can buy a system costing about Tk 24,000 (about half their annual income), by paying instalments of typically Tk 400 to 800 (£3 to £6) per month spread over two to three years.

Rahimafrooz batteries are designed to last for a minimum of eight to ten years with proper care and maintenance, and carry a five-year warranty.

Rahimafrooz batteries are designed to last for a minimum of eight to ten years with proper care and maintenance, and carry a five-year warranty. Rahimafrooz repairs batteries on behalf of the participating organisations free of charge in most cases. So far, more than 3,300 batteries have been repaired even though they were not under warranty. Rahimafrooz buys batteries back for recycling at the end of their service life, paying the users Tk 300 to Tk 500 (£2.30 to £4), depending on their condition.

The charge controllers and FTL have an expected lifetime of five years and carry a three-year warranty. Rahimafrooz provided 2% emergency stock of charge controllers and FTL free of charge to the participating organisations until January 2006, so that replacements could be provided rapidly if problems arise. This service is very valuable to users, many of whom live in remote locations and might have to wait without a working system for up to two months if individual components had to be returned to Dhaka for repair. Now the emergency stock is only 1% because the designs of Rahimafrooz have proved very reliable in use. The PV modules carry a 25 year warranty, to produce at least 80% of their rated power.

Rahimafrooz has used its substantial technical expertise to support the POs with whom it works. One way is by providing training on the basic maintenance and safety of SHS. Rahimafrooz takes a solar demonstration kit around villages along with the POs, to show people the benefits of owning an SHS. Rahimafrooz also carries out servicing and repairs on behalf of the POs.

Solar-home-systems are replacing kerosene lamps, and in doing so provide several benefits. The immediate benefit to users is avoiding the fumes and fire-risk of kerosene lamps. Women, who usually spend more time in the home, benefit most from the elimination of kerosene smoke and the risk of burns.

There are also substantial savings in production of greenhouse gases. Rahimafrooz estimates that each household without a SHS uses an average of ten litres of kerosene each month, so each SHS saves the production of about 300 kg CO2 per year. The Finance Ministry estimates a somewhat higher average saving of 375 kg CO2 per year. This means that the 25,000 SHS supplied by Rahimafrooz are saving between 7.5 and 9.4 thousand tonnes of CO2 per year. Further savings arise from the solar mini-grid and solar water pumping systems, which Rahimafrooz has installed.

The use of solar-home-systems brings significant social benefits. Many clinics use them to provide lighting during check-ups or operations. The availability of PV power for phone chargers has made it possible for people in rural areas to use mobile phones. This increases business opportunities, and also allows people to maintain contact with family members throughout Bangladesh and abroad. Families can watch television or listen to music. Domestic chores and studying can be carried out more easily, for longer, and more safely in the evenings with PV lighting, and there is less risk of eye strain.

Owners of an SHS save about Tk 400 to Tk 500 per month on kerosene at the current price of Tk 40 per litre which, in many cases, covers their loan repayment. Kerosene costs have risen by 60% in the past year, and are continuing to increase due to rising world oil prices and higher transport costs. They will increase further when the government reduces its subsidy of kerosene. Therefore the economic benefit of owning an SHS will also continue to increase.

SHS have significant income-generating potential. Many women have used the increased working time provided by the SHS to start small-scale businesses such as poultry and handicrafts. Businesses can remain open for longer, including tailoring shops, restaurants and grocery shops. New business opportunities and jobs have been created, such as solar technicians, electronic repairers, and running community TV stations and renting mobile phone time.

Rahimafrooz now employs around 100 people on solar system components. About 20 of these are former street children, who received basic training in electronics from a UNICEF programme. The Rahimafrooz solar field staff has increased from 3 to 17 as a result of the REREDP. The PO clients of Rahimafrooz have employed an estimated 700 engineers and technicians to install and maintain solar PV systems. Around 50 people are also employed by Innovative Technologies in Bangladesh to manufacture the charge controllers and FTL developed by Rahimafrooz.