Climate change is making rainfall unpredictable and fuel for petrol irrigation pumps is expensive. Futurepump manufactures and sells a low-cost, highly efficient and portable solar irrigation pump aimed at the millions of smallholder farmers in Kenya and around the world. It’s a cleaner and more sustainable alternative to costly and polluting petrol or diesel pumps, and instead of spending hours carrying water, farmers can increase their income, growing more crops, all year round.

There are millions of smallholder famers around the world that rely on rainfall water to irrigate their crops. In Kenya alone there are 7.5 million smallholder farmers and less than 2% of farmland is irrigated.

Futurepump’s solar-powered irrigation technology is helping farmers irrigate more land and leapfrog to year-round sustainable crop growing which is simultaneously increasing their productivity and income as well as allowing them to move away from polluting fuels.

There are millions of smallholder famers around the world that rely on rainfall water to irrigate their crops. In Kenya alone there are 7.5 million smallholder farmers and less than 2% of farmland is irrigated. Rainfall is becoming more unpredictable and farmers are turning to manual or fossil-fuelled irrigation to save their crops. Irrigated farming can not only mitigate against crop failure, but can improve food security and reduce poverty by guaranteeing some income from sales of produce throughout the year. However, manual irrigation is very labour intensive and fossil fuel pumps lock farmers into costly recurring fuel and maintenance payments, and pollute the environment.

There is a clear market for an alternative irrigation system which is affordable, targeted at smallholdings, effective and easy to use. Futurepump was founded to bring the SF1 solar pump to market, accompanied by innovative payment plans, to meet this demand for clean, effective irrigation.

Futurepump designs, manufactures and distributes affordable and reliable small solar-powered water pumps for smallholder farmers. Futurepump’s customers farm rural, semi-commercial farms of less than one hectare and often combine farming with other income-generating activities. The farmers have access to water sources at or near the surface. Prior to adopting the SF1, customers were either manually irrigating their land or using fossil fuel pumps. The solar pumps are reducing dependence on polluting fuels, increasing smallholder farmers’ yields, and saving them time and money. 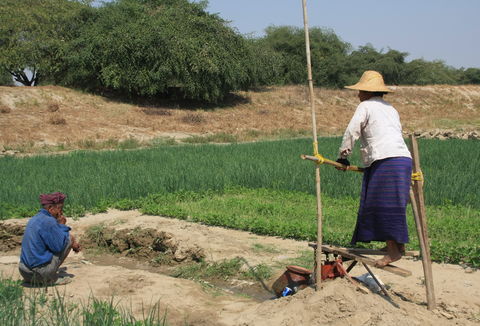 Futurepump manufactures its own brand solar pump, SF1, in Rajkot, India, at a wholly owned subsidiary, before shipping to its markets in Africa and Asia. Sales of the SF1 are then made through two different channels: direct to farmers (in Kenya) and through established distributors who then market and sell the pump (in all other markets). The distribution model is two tier, national level distributors handle imports of container loads of pumps which are then distributed to a network of smaller local distributors. The marketing is carried out through demonstrations on farms, at markets and agricultural shows, and via a variety of media marketing methods including social media.

The SF1 is sold for 65,000 KES ($650). To date, about 45% of Kenyan customers have paid upfront with the rest paying on credit. An initial payment plan required a down payment of $200 and then monthly payments of $25, meaning the pump is owned outright in less than 2 years. Futurepump is working with a number of PAYG companies to ensure pumps incorporate the relevant technology for remote monitoring, payment and control.

Installation of the solar pumps is carried out with trained technicians who also provide end-user training. The SF1 comes with 24 months labour and spare parts warranty which ensures that the products are a good investment for smallholder farmers.

Since sales started in 2014, 1,300 portable SF1 solar-powered pumps have been sold in 29 countries, benefiting at least 5,200 people. In addition, some farmers informally rent out or share their pump with family and neighbours. The solar pumps are bringing economic benefits to farmers and families by allowing farmers to grow high-value and ‘risky’ (high water-demanding) crops, such as tomato, watermelon and kale during more of the year, and by providing a cleaner, cheaper alternative to fuel pumps

On average, the payback period for a pump is one and a half to two years. If using a powered pump for the first time, farmers can earn, on average, an additional $80 per season and the pump allows them to grow for up to three seasons per year. In addition, most farmers hire paid labour for manual irrigation and the pump reduces spend on this. If replacing a fuel pump farmers can save on fuel, maintenance and labour costs of up to $300 a year. 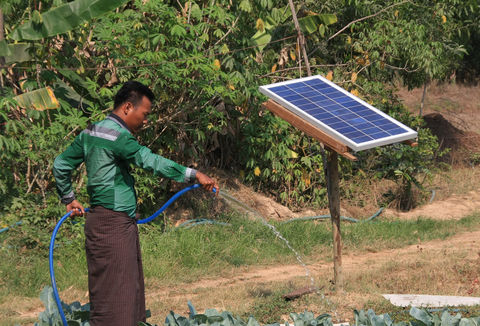 Swapping from a fuel pump results in a significant change in water flow rates. The slower, gentler flow of water from a solar pump is easier on the soil than that of fuel pumps, causing less plant root erosion and soil wash away.

Also, due to its portability, zero running cost, and ease of use, SF1 allows the active involvement of women and youth in production of high value crops; which is important in addressing unemployment and migration of people from rural to urban cities.

Futurepump’s first commercial pump is the SF1. It is a reciprocal piston pump powered by an 80Wp solar panel with a DC motor. The piston design means it is easy to maintain and fix. It can pump water from a maximum depth of six metres and is therefore suitable for shallow wells, or lifting water direct from rivers, ponds and channels. It has a manual back-up and has been designed to be robust and can cope with some mud/particulates, such as those in river water. The pump works well with tank, drip system and sprinkler irrigation. It is also lightweight so can be carried by one person for short distances or be transported in a wheel barrow.

The SF1 was designed and developed in partnership with PRACTICA Foundation, a Dutch centre of expertise on products for low income consumers. With support from iDE (International Development Enterprises), the design was refined and adapted to suit conditions in the field based on lengthy field tests with farmers in Kenya, Ethiopia, Nepal and Honduras.

Futurepump want to pioneer remote monitoring systems which will allow the introduction of more innovate and targeted financing mechanisms and want to expand its customers in more countries through a growing network of distributors across Africa and Asia.