Many traditional water mills grind grain to produce flour in the remote villages of the Himalayan mountains and foothills in Nepal.

The Centre for Rural Technology runs a programme to upgrade traditional water mills, so that they work more cleanly and efficiently, can operate for a longer period of the year, and also be used for other activities apart from grinding.

We generate electricity from this which is very good. We can have the water mill as well as generating electricity which is great.

The streams in the mountains and hills of the Himalayas in Nepal support many traditional water mills (ghattas), which use heavy grindstones to mill grains and make flour. Watermillers often have to work for about 12 hours per day in order to make a living, and the entire milling family lives on site and breathes in flour dust all the time. Traditional mills are largely made from wood, and most parts have to be replaced every two years. With low operational efficiencies, these traditional mills are now unable to satisfy demand, with long delays for farmers wishing to get their crops milled and a rise in the number of diesel powered mills. Diesel mills are often far from the hill villages, so people have to walk long distances to use them. Although diesel mills produce flour more quickly, the high grinding speed reduces flour quality.

The Centre for Rural Technology Nepal (CRT/N) manages a programme of water mill upgrades to speed up the rate of flour production, and to supply mechanical and electrical power for other uses as well.

CRT/N is an NGO established in 1989. In 2008/9, the organisation employed 60 people and turnover was US$504,000, of which US$124,000 was spent on the water mill programme. CRT/N is funded by selling professional services to clients and by grants and awards. The water mill programme is run by CRT/N on behalf of the Alternative Energy Promotion Centre (AEPC) of the Government of Nepal and the Netherlands Government.

Traditional water mills (ghattas) have been used in Nepal for centuries to provide mechanical power for agricultural processing, such as grinding wheat. In order to power a traditional mill, water is led from a fast-flowing stream along a canal, and then down a steep chute or penstock into the mill house. The water, flowing at a rate of up to 100 litres per second, turns the wooden runner of the mill, which rotates a vertical shaft. The grindstones are attached directly to the shaft, on a raised floor above the runner. Grain is fed between the grindstones from a hopper, and flour pushes out from the sides. Key mill parts are made of wood, resulting in a lifetime of only two years.

With an operational efficiency of less than 25% and a typical mechanical output of 0.2 to 0.5 kW, these mills grind between 10 and 20 kg of cereal per hour. The water mill modifications provided by CRT/N consist of replacing the wooden penstock with high density polyethylene pipe, and the shaft and runners with precision-made metal parts. Sometimes the canal is also upgraded for irrigation.

The mill improvements increase the grinding capacity to between 20 and 50 kg per hour, and also improve durability. Some mill upgrades include a long shaft to attach other equipment like saw mills or electric generators.

The millers pay part of the cost of the improvements, and the remainder is covered by the programme subsidy. The subsidy for the short shaft version was about 50% when the programme began, but this was gradually reduced. In 2007, owners paid US$170 - $250 (NR 11,000 to NR 16,000) for a short-shaft upgrade, out of a total improvement cost of US$310 to $390 (NR 20,000 to NR 25,000). The millers’ contribution is usually paid partly in cash (sometimes raised as a loan from a local micro-finance organisation) and partly in kind, through providing transport and labour for installation.

CRT/N contracts manufacturing to twelve existing metal-workshops, which it has approved to produce parts for improved water mills. Service centres offer a one-year warranty on the parts that they install, after which users have to pay for servicing and repairs. The drive belt on the long shaft version needs replacing every six months, the grindstones every three to
five years and the shafts every ten years.

CRT/N helps build capacity for both manufacturers and service centres, and continuously monitors them to ensure they are providing the required quality service. Eventually, it plans for the Watermillers’ Associations to take over the servicing.

All the new mill parts have unique serial numbers, which are used to provide a traceable record in case of future faults.

At the end of 2006, over 2,400 traditional mills had been improved, providing milling services to about 96,000 families. 237 were long-shaft upgrades with auxiliary services, and 31 of these included electricity generation.

Water mills are usually closer to the villages than diesel mills, so provided that they have the capacity to mill grain quickly, people will use them in preference. Business has declined for diesel mills in areas where there are a large number of improved water mills, some have closed down and new diesel mills are not being built. A CDM study estimated that each improved water mill could replace about half the capacity of a diesel mill and offset about 900 L/year of diesel, equivalent to 2.4 tonnes/year CO2 or 5,760 tonnes/year CO2 for all the water mills upgraded by the end of 2006.

Because improved water mills grind more slowly than diesel mills, the flour does not get so hot and does not pick up the taste of diesel. This means that the flour has a longer shelf life, is more nutritious and has a higher market value.

The traditional water mill had limited output. The water mill owners' income has improved, the output has been doubled. That's how we've benefited. 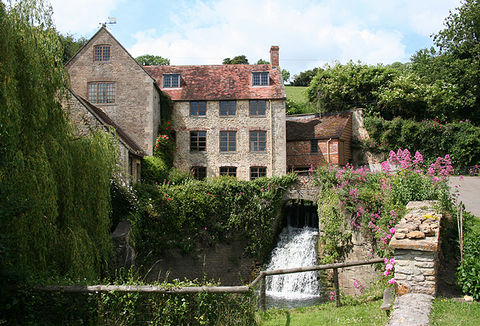 The milling efficiency of an improved water mill is high and thus millers can work shorter hours. The water mill upgrades have improved the self-respect and social standing of the mill owners, who have traditionally come from low-status social groups. As a result several millers’ associations have been formed with the aim of improving their advocacy power as well as livelihoods, for example through negotiating for quality services, marketing of products and water rights issues. The associations also provide education and training to the millers.

Customers generally have to walk some distance to get to the mill, so usually wait for their crop to be ground. Since the improved mill has a higher throughput, this waiting time is reduced from about 3 to 4 hours to 1 to 2 hours, and frees up time for other activities 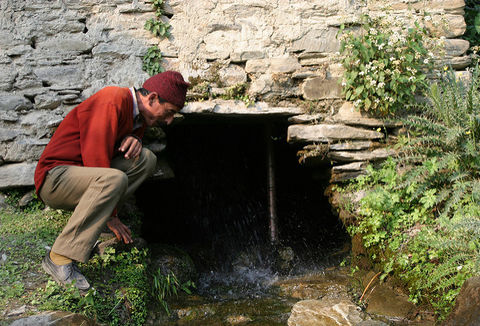 Owning an upgrade increases the income of a watermiller, because grain is ground more quickly so more customers can be supplied. In addition, improved mills can operate at a lower water flow rate than the traditional mills, which extends their period of operation into the dry season for up to two months each year. There are now mills operating for 6 to 12 months of the year depending upon the availability of water. Users generally need the mill services throughout the year.

Owners of long-shaft improved water mills can sell additional services such as rice-hulling, cutting timber and electricity, and this can increase income considerably more. One miller who bought a top-of-the-range US$1540 (NR 100,000) upgrade including a generator, rice huller and irrigation pump is earning an extra US$850 (NR 55,000)/year from rice hulling, so will pay back the initial investment and running expenses in just under two years.

The local manufacturing of parts for improved mills results in an estimated 50 days work per unit produced, and the metal workshops earn about US$8 (NR 500) profit on each unit. Additional employment in promotion, transporting and selling is estimated to be 25 days per unit. Parts last ten years, compared with approximately two years for traditional mills.

An unmodified water mill requires regular maintenance, which consumes timber at a rate of one tree every two years.