Institutions in rural areas of Southern Africa use large amounts of fuelwood for cooking, and this contributes to widespread deforestation.

The Aprovecho Research Center worked with the Programme for Basic Energy and Conservation in Southern Africa (ProBEC) to design more efficient biomass stoves for institutional cooking in Malawi and other countries in the region.

We bought our stove to cook meals for 40 people, but we used it to cook for 400 on our open day.

Malawi is one of the poorest countries in the world. Deforestation is a huge problem: large areas of land have been cleared to grow cash crops such as tobacco and tea, and processing these crops (drying them) uses enormous amounts of fuelwood. Wood is also used for cooking in institutions like schools, exacerbating deforestation and draining finances.

The Aprovecho Research Center assisted the Programme for Basic Energy and Conservation in Southern Africa (ProBEC) in designing more efficient biomass stoves for institutional cooking in Malawi (the focus of this case study) and also Lesotho, Uganda, Mozambique, Tanzania and Zambia.

ProBEC involved entrepreneurs in each country in training workshops, where a woodstove of suitable efficiency was developed to suit local cooking practices and engineered with the assistance of an Aprovecho Research Consultant. The stoves were designed for large institutions, such as schools, prisons and tea-estate kitchens.

Aprovecho Research Center is a non-profit corporation, managed by Chief Executive, Dean Still. It has been designing stoves since 1976, and has worked with hundreds of partners in many different parts of the world. Larry Winiarski, one of the Aprovecho members, invented the ‘Rocket’ stove concept. In 2006 Aprovecho Research Centre had an annual turnover of US$195,000 and five staff.

In this programme, Aprovecho Research Consultant Peter Scott provided detailed technical expertise in the design and manufacture of stoves, as well as support and advice to the stove builders and ProBec staff.

ProBEC (the Programme for Basic Energy and Conservation in Southern Africa) – due to end in 2010 - promoted improved cooking stoves in the Southern African region. It provided expertise, training to producers, research support, monitoring and help with marketing. In addition to the work on institutional stoves, it developed efficient domestic stoves, looked at ways of reducing industrial uses of fuelwood (such as in tobacco drying), and is working with central and local governments on biomass conservation. The project to improve institutional stoves ran from 2003 to 2007, with about US$400,000 spent on the Malawi component.

The stoves designed in each country are based on the ‘Rocket’ principle, which uses an elbow-shaped combustion chamber. The wood sits on a shelf in the horizontal part of the elbow, and the part under the vertical section is set alight. The vertical section acts like an internal chimney, drawing air through which ensures efficient combustion of the wood and good heat transfer to the cooking pot. The height and width of the elbow must be in the correct ratio in order to maximise performance.

A Rocket stove designed for a 120 litre pot cost about US$180 (25,000 MK) on its own or US$610 (85,000 MK), with the stainless steel pot. A smaller stove, taking one 20 litre and one 40 litre pot cost about US$265 (37,000 MK). In Malawi, purchasers of metal Rocket stoves pay the full cost of the stoves. Most stoves were bought by donor and charitable organisations for schools, orphanages and hospitals, others were purchased or self-built for tea estates and prisons.

ProBEC allowed a producer to use the Rocket brand only when it had checked their quality of production, returning and re-checking this at intervals. The licensed producers add a name plate with a serial number to each stove, and keep a record of sales. They offer a three-month guarantee against defective manufacture. The producer usually delivers each stove and explains to the customer how to use and maintain it, with an instruction leaflet provided by ProBEC. The stoves are simple to operate and require very little maintenance.

Stoves are used regularly and last for typically four years, although this can be longer. Most problems which have occurred are from cheap cooking pots which start to leak. ProBEC therefore encouraged producers in Malawi to sell stoves with a long-lasting stainless steel pot as standard. 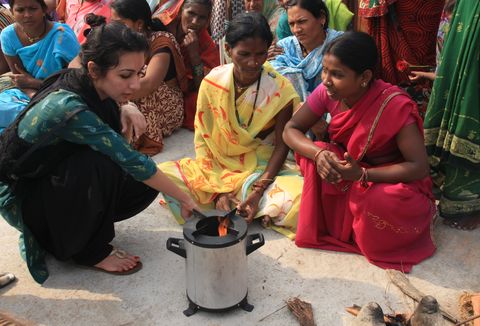 In Malawi most institutional Rocket stoves are constructed from mild steel. The elbow is made from special insulated bricks fired from clay mixed with sawdust, which makes them light. A layer of very hard cement on the inside protects the bricks from damage when wood is pushed in.

The pots are supported underneath and at the sides by metal rests, so that they sit very accurately in the centre of the stove. The hot combustion gases are forced through a narrow (~12mm) gap around the sides of the pot. It is very important to manufacture this accurately in order to maximise heat transfer and combustion efficiency, so the top of the stove is designed to fit the size of pot which people want to use. In Malawi, this could be a 200 to 300 litre pot for a large institution, with 20 to 40 litre pots for smaller schools.

These stoves do not have external chimneys, but rely on maximising the combustion efficiency in order to reduce the production of smoke.

By 2006, ProBEC had helped set up four institutional Rocket stove businesses in Malawi and seven elsewhere in the region. About 750 stoves were produced and sold in Malawi, and a similar number in the rest of the region between 2004 and 2006.

An institutional Rocket stove uses less fuelwood than an open fire. Because much of this wood comes from unsustainable sources, the stoves reduce deforestation and greenhouse gas emissions. (See the update at the end of this report for more details on these savings). Less road transport fuel is also needed to deliver wood: at Maula Prison in Malawi, for example, it was estimated that the six Rocket stoves they use save about 900 litres per month of diesel fuel.

Laboratory tests have shown that the Rocket stove produces about 80% less carbon monoxide and 65% fewer particulates than an open fire. This means that kitchens are cleaner and healthier for cooks, many of whom work all day in an institutional kitchen. The insulating bricks surrounding the stoves mean that the outside is cool and so there is less risk of burns. Cooks also appreciate being able to work at a comfortable height, rather than bending down. Spending less on fuelwood also releases money for other purposes, such as educational materials in schools (see update).

The Rocket stove programme has created employment for stove manufacturing businesses. For example, by 2006 Ken Chilewe - the main stove producer in Malawi - had grown his business from two to 27 staff.

Thousands of institutions in Africa provide meals cooked using fuelwood every day, and supplies of wood are increasingly unsustainable. The work of ProBEC in Malawi has shown the potential to design stoves for local manufacture which significantly reduce wood use. For replication, it is essential for the design to be suited to local cooking practices and liked by the cooks who will use it. 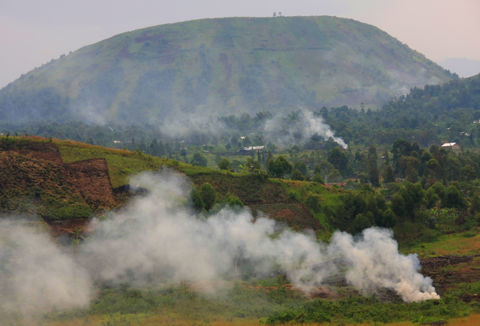 An independent evaluation of the Malawi programme was undertaken by GTZ (the German development agency) in early 2008, and confirmed that 4,200 stoves had been sold between 2004 and 2007, a substantial increase on 2006. Benefits were significant. Wood savings compared to open fires averaged about 70%, giving over 23,000 tonnes/year savings in total. It was estimated that about 30% of the wood savings (6,900 tonnes/year) came from avoided deforestation and the felling of indigenous trees, representing the protection each year of 690 hectares of natural forest. Preventing deforestation prevents greenhouse gas emissions. The estimated 6,900 tonnes a year reduction in deforestation represents a saving of roughly 10,000 tonnes/year CO2.

The GTZ evaluation also showed that cost savings for users who purchase wood are substantial, with a payback period for the stove of between 90 and 280 cooking days, depending on size of stove and numbers of meals cooked. For hospitals or orphanages cooking two meals per day for large numbers of people, the cost of a 200 litre stove is paid back within three months.

Demand for efficient institutional stoves produced by local entrepreneurs has continued to grow, even though the ProBEC institutional stove programme finished at the end of 2007. By December 2009, 6,800 stoves had been sold in Malawi and over 2,000 elsewhere in the region.

Aprovecho Research Center continues to provide design and consultancy advice on improved stoves and other biomass combustion systems in many different parts of the world. The centre used the 2006 Ashden prize money to develop an online tool for designing Rocket stoves. This is available free at www.rocketstove.org, along with videos of stove construction and use, so that others can use Rocket design principles in stoves suitable for different cooking practices. Aprovecho Research Centre and the Shengzhou Stove Manufacturer won the 2009 Ashden award for setting up mass production of domestic Rocket stoves.