The #AppliancesEmpower campaign, run by the Efficiency for Access Coalition, is strengthening global links between energy access, gender equality and social inclusion. Guest author Yasemin Erboy Ruff says a new approach could change the lives of women and girls.

Revisiting the gender-energy nexus through a productive use lens

The concept of the 'productive use' of energy — activities that use energy to improve income and welfare — is rising exponentially as an area of interest in the distributed energy sector. Addressing energy poverty from a productive use angle not only enhances the ability of energy access activities to achieve scale and sustainability, but also increases the likelihood that their positive benefits will spill over to other Sustainable Development Goals. If productive uses of energy are properly harnessed and universal access to energy (SDG 7: clean energy) translates to new or increased socioeconomic benefits, then other SDGs related to economic development (e.g. SDG 1: no poverty; SDG 8: decent work and economic growth) or fundamental rights (e.g. SDG2: zero hunger; SDG6: clean water and sanitation) can be fully met.

When we hear the phrase 'energy for productive use', most people immediately associate the concept with agricultural technologies, such as milling or water pumping, or industrial activities, like welding or infrastructure development. However, household appliances can also be transformative from an income generation perspective, enabling micro-enterprises to attract more customers and increase revenues. Our recent article with Programme Partner, Power for All, makes the case for a more inclusive definition of 'income-generating appliances' that includes fans, refrigerators, and other household appliances.

Regardless of scope or definition, it is clear that energy and productive use interventions have, to date, not taken gender differentials explicitly into account. This status quo is likely to deliver unequal impact outcomes: Men typically own more businesses (71% of enterprises in Tanzania are male-owned) and operate in a wider range of more energy-intensive activities such as construction and manufacturing (male-owned enterprises spend three times as much on electricity than women-owned counterparts in rural Tanzania), according to our campaign partner, ENERGIA.

To complicate things further, women in many developing countries are less likely to be employed in the formal economy, and often work in enterprises with lower energy demands, such as tailoring or food preparation. Finally, men typically employ other men in the businesses they run, whereas women employ women, thus perpetuating the gender divide for productive use applications in the absence of purposeful intervention.

Improving access to off-grid appliances has broader impacts on gender equality than increased economic opportunities. Solar water pumps and mills, for example, can also reduce time spent on household and farm chores alike, and the drudgery associated with traditionally female-led activities. This can include anything from being able to easily draw clean water for cooking, cleaning, and irrigation purposes mechanically rather than by hand, to being able to process a harvest automatically rather than having to sort and process grains manually. Similarly, household refrigerators can help keep prepared food, produce and dairy products cold, meaning not only that more items can be kept at the right temperature to unlock more sales and less waste, but also that women do not need to shop for and cook food for their families every day, opening up more of their time for other activities. In addition, televisions and mobile phones — appliances not traditionally considered under the productive use umbrella — can serve as a conduit for previously unavailable national, regional, and global information and perspectives. Expanded access to cable television is associated with positive changes across school enrolment, literacy, family planning, financial decisions, and health — all with significant relevance for positive change across corresponding SDGs.

The perception of many energy access practitioners and off-grid appliance distributors is supportive of the theory that the benefits accrued from the uptake of such technologies will differ between genders. In a recent Efficiency for Access survey, respondents were asked to rank the socioeconomic impacts of household appliances by the gender of the end-user. While demand for LED room lighting, mobile phone charging, and refrigeration showed little deviation, household appliances that support labour-intensive activities, such as hand power tools, clothes washers, sewing machines, and electric cookstoves demonstrated significant differences between genders, and all fell within prescribed gender norms.

Despite this variation, the relationship between access to income-generating appliances and its impact on shifting gender norms and socioeconomic outcomes remains largely unexplored. Productive use appliances are likely not reaching the full potential for women because the sector’s current focus is on larger, more industrial solutions whose incumbents have traditionally excluded women. Compounding this issue, there are indicators that women are also being left out of the loop for technology-enabled tools such as digital or mobile-based services targeting agriculture assistance. All these trickle-down effects add up to making the technology barrier even harder to overcome for women, and are a disservice to making progress towards SDG 10: reduced inequalities.

How can we move the narrative forward?

Most early movers in the distributed energy sector are still struggling to demonstrate the commercial viability of increasingly complex technologies in nascent and disorganised appliance markets, which provides a perfect opportunity to build in gender-sensitive approaches from the get-go. A more realistic understanding of the current state of play across the 'productive use' spectrum will help companies develop more inclusive services, and eventually prove their impact potential. Blending consumer-facing design considerations and awareness-raising will, in turn, unlock more demand as well as financing structures, and therefore more support for proving the viability of and achieving true scale for productive use appliances.

Gender mainstreaming approaches for off-grid appliances that take into account both women’s involvement and empowerment — from design to distribution and use — can expand the productive customer base for entire communities. Prioritising more traditionally 'gendered' appliances like irons, sewing machines, and cooking solutions and supporting direct exploration of gender-positive business models can serve as a good starting point for the sector.

More gender-focused consumer research is the key: to parse out gendered usage patterns and preferences; unearth best practices in technology design, business models, and supportive activities; and pilot targeted design interventions to enable more women to participate in and benefit from scaling productive use appliances.

We will be raising a number of concrete suggestions to the abovementioned activities throughout the course of our #AppliancesEmpower campaign, which will run through March 2020. In collaboration with our campaign partners, you can look forward to posts and announcements across connections with health; disability inclusion; inclusive business models; emerging gender mainstreaming research and scoping; and lessons learned from positive interventions. Follow us on Medium, Twitter, and LinkedIn; to stay up to date on campaign developments, lend your voice in upcoming Twitter chats and webinars, and to pledge your commitment towards gender mainstreaming energy access efforts. 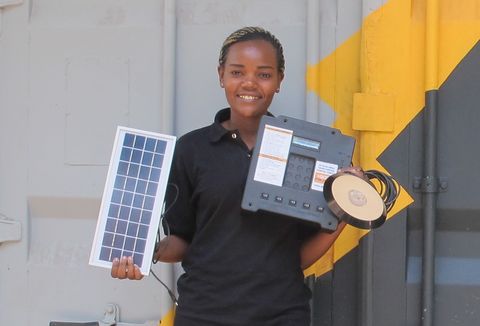 Is clean energy shutting out women?